Airbnb was one of the most dynamic and exciting start-up companies in the world.
It was present in over 190 countries and had over 1,000,000 listings globally.
However, in China, brand awareness was still extremely low.
Even the few who had heard about the brand often did not have a clear understanding of what Airbnb was about.
The task was to reach out to opinion leaders in China – travel and lifestyle journalists –
and create brand awareness in a way that would educate and excite them. 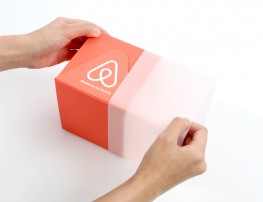 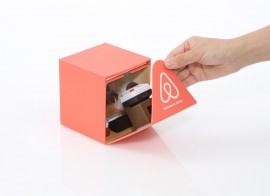 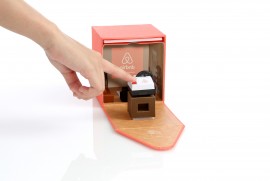 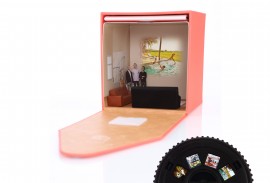 Idea
The idea was to create in a box a replica of the very first Airbnb home, exact in terms of its layout and interiors.
All the miniature furniture was folded and glued by hand.

Images of selected properties in popular destinations for Chinese travelers were placed on the wheel of a tiny projector thereby creating the world’s smallest screening room.
The focus was manually adjusted and were securely attached to arrive to their destination in place.

The first batch of 23 mailings were sent to top-tier travel and lifestyle journalists before the Lunar New Year to capitalize on this key travel period. After receiving overwhelming positive feedback, the second batch of 27 mailers were sent out in early March.

The mailing achieved a 68% direct response rate, way over the industry benchmark. The 50 pieces generated 97 clicks-throughs to a link with Airbnb properties. The brand received numerous positive reactions from the bloggers and journalists, who described the DM as “creative and unique”.

Feedback from journalists in China was so amazing that the idea was adapted for other markets across Asia.

In the press release that was sent out to explain this idea, Lena Sönnichsen, Airbnb’s Head of Communications for APAC, said the mailing “Not only explains Airbnb’s background, brand and benefits beautifully, it also transports the sense of quirk and whimsical magic that we are always after.”