BT identified an opportunity to steal market share in specific geographic areas by promoting its broadband speeds wherever it was faster than its competitors. 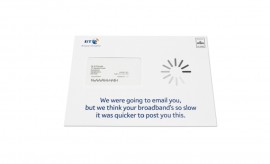 BT was to target potential new customers with a highly relevant message by using data to pinpoint households with slow broadband provided by competitors. The campaign set out to let these prospects know how much faster they could experience the internet with BT Infinity Broadband and did so in a very BT brand way – using much-loved British humour to make its point in a warm and surprising way.

The team used traditional ‘snail mail’ to allow the medium to become the message – humorously suggesting that sending something by post might be faster than trying to contact them by email.

The line on the outside of the envelope delivered the campaign message right from the doormat: “We were going to email you but we think your broadband’s so slow, it was quicker to post you this”. Without even opening the letter, the point was landed, using a seemingly restrictive format to the campaign’s advantage.

The letter inside went on to explain that BT Infinity Broadband would be up to five times faster than their current connection and that, at just £5 a month, there was no need for them to put up with slow internet any longer.

The campaign was highly effective at grabbing attention and attracting new customers to BT Infinity Broadband.

Response rates were 0.41% against a control 0.30%, with 11.4% conversion. Both cost per response and cost per sale were less than half the target.