Background
Using a Calor Gas powered fork-lift truck had many benefits over using conventional diesel or electric models. They were more reliable, powerful and there was less down-time. The problem was that while factory managers needed to know this, they were not interested in meeting sales reps to learn otherwise. They were also notoriously disinterested in marketing collateral. The objective, then, was simply to get a first meeting with these guys.

Idea
To demonstrate in a playful way the benefit of using Calor-powered trucks,  warehouse managers were sent a very heavy box with a set of gym dumbbells inside. However, when they lifted out the dumbbell, it turned out to be as light as a feather. The weight was concealed in the lining of the box. Enclosed was a simple brochure outlining the key benefits of the product and a note to say a rep would be in touch later that day to set up a meeting. 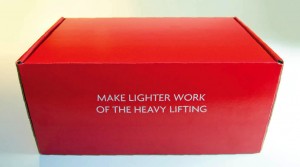 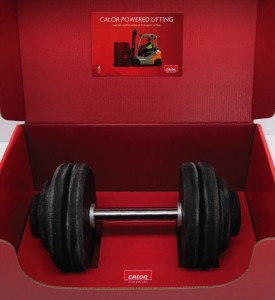 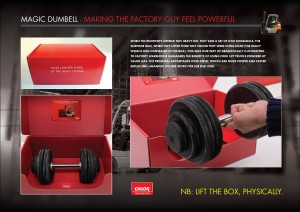 Results
When the telesales people rang after the mailing, not a single meeting was refused.

Our thoughts
This idea works so well because the creative treatment is a reversal of the expected.
All of the cues are there to set the mind up to believe the dumbbells are heavy. But when it turns out they aren’t, then the surprise doesn’t just make sense of the message (Calor Gas, making lighter work of heavy lifting) it burns it into memory.
This would not have come cheap. But then, fork-lift trucks don’t come cheap either. If this mailing led to more than three or four being sold, then the ROI generated would have been seriously impressive.