Drunk History is a show on Comedy Central.
In each episode, an inebriated narrator tells a story from American history,
while actors re-enact the narrator’s drunken version of the tale.
Since Comedy Central was a relative newcomer to the South African broadcasting scene,
they needed to keep partners aware of all the new content.
Also, they wanted to support the brand values of being brave and unafraid to push boundaries.

Idea
Ogilvy & Mather Johannesburg designed a custom whiskey bottle and sent it to
Comedy Central’s key media partners to build hype for the show.
Each bottle told four historic stories.
The closer to the bottom of the bottle the stories got, so they became progressively less accurate,
less relevant and less sober. 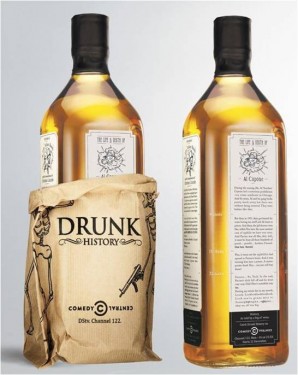 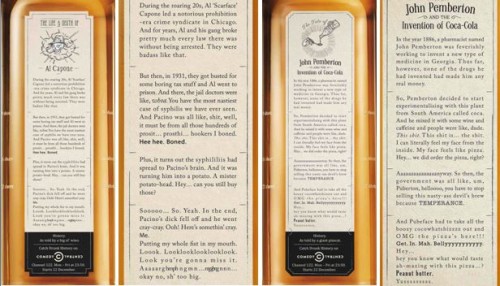 Results
There was positive feedback about the mailing. In addition media partners such as Grazia SA magazine
published news about the show and celebrities including Moloko Makhafola from Big Brother Mzansi tweeted about it.