The brief was to get small business owners in Australia to choose DHL Express when importing their precious goods from overseas markets.

Idea
Rather than just talk about DHL’s speed and reliability, Clemenger Proximity set out to prove it. They placed an ad in English in the Shanghai Business Daily on Monday clearly stating that the recipient would be reading it by Thursday. Then they dispatched the newspaper to their target group.

By making their delivery deadline public, DHL left people in no doubt that they were a freight company people could rely on. 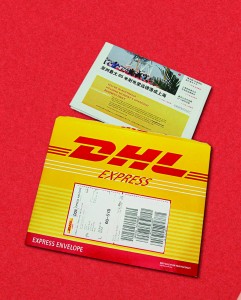 Results
Amongst the most lucrative cross-sell segment, the Imported Ad increased the response rate by 85%.

Our Thoughts
Years ago, Ogilvy One in London had an idea like this to demonstrate the quality of DHL’s service. The idea was to set a stopwatch running, then put it in a package and mail it to a Delivery Manager. At the time, DHL didn’t want to risk it.
Clearly the service has sharpened up because in these days of Tweeting and status updating, if a company gets it wrong, everyone knows about it fast.
It makes this mailing doubly reassuring to those who received it. It is not only a  demonstration of the speed of delivery but also of DHL’s faith in their own people.