Fruit of the Loom® was committed to making underwear that fitted perfectly. They wanted a campaign to support their microfibre women’s panties and men’s boxer shorts.

Idea
Fruit of the Loom® launched a national brand campaign titled “Start Happy”. At its heart was the simple but universal truth that the underwear you put on in the morning has the power to set the tone for the wearer’s entire day.
The integrated campaign used TV advertising voiced by comedian Jay Mohr, radio and digital advertising driving traffic to www.fruit.com.
The campaign also used mail as part of a national sampling campaign. In association with LinkedIn, the Fresh Gigs programme identified thousands of people starting a new job in the month of the campaign launch and invited them to take up the offer of free underwear and to share the stories of their fresh start in their new jobs. 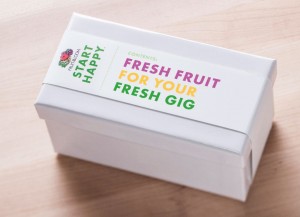 Results
So far, across the board, they are seeing double the benchmarks for LinkedIn InMail campaigns. The “total open” and “total post-open” click percentages are at over double LinkedIn’s average and the conversion rate is almost three times LinkedIn’s benchmark.
And they’ve had more than 126,000,000 earned impressions.

Comment
Mail is often overlooked as a component part of brand campaigns but here is Crispin Porter + Bogusky, one of the world’s creative powerhouse agencies, showing how it can massively amplify a traditional above-the-line campaign.
A couple of TV spots told the stories of people starting fresh jobs in fresh underwear (a stunt-woman, a tyre-change guy in a motor racing team) but where the campaign really reached out to millions was through social media.
People starting new jobs were identified on LinkedIn and mailed new underwear and asked to blog, tweet and comment about their experiences.
A couple of thousand people were turned into influencers, and their stories will last for months, if not years, after the TV campaign has been forgotten.