Denny’s was a coffee shop/diner serving fast food out of some 1,600 restaurants in the U.S.A.

Denny’s was known for serving food around the clock. What they wanted to do was to emphasize

the fact their diners did not close, except when required to by law, by launching an All-Night

The All-Night menu was printed onto pillowcases, which were then distributed around universities.

Students seemed to be the perfect target audience. They were up late at night, they hated having

to cook themselves and would love some new bedding, especially if it was free. Whereas ordinary menus

tended to get lost or thrown away or pushed to the back of a drawer, this one would always be there.

Just at the very time the students might be considering a late-night snack. 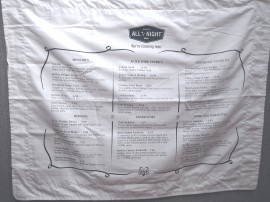 Since the launch of Denny’s ‘All Night Menu’, average unit sales steadily increased at Syracuse

University, where the pillowcase was first distributed. Regional sales were up by as much as 11%

while the competition was trading flat. The pillowcases really were an ‘overnight success’ and

became the talk of the campus.

In almost all marketing communication, the key to success is relevance. What is appealing about

this idea is that the creative team so clearly had their target audience in mind. Students. They stay up

all night, they get the munchies, they don’t wash their sheets for months on end. The pillowcase would

have struck a chord with every kid who had one delivered. That’s relevance for you. An idea that

knows who you are, where you are and what you are.