The task was to advertise the IKEA Assembly Service with an unusual direct mailing.

The sollution
IKEA customers who had already booked the Delivery Service when they bought furniture but not the Assembly Service, received a small package before the furniture delivery : the IKEA Assembly Training. A puzzle that one could use to practice the upcoming furniture assembly. But the furniture shown on the puzzle was assembled completely wrongly. And even when people completed the puzzle correctly, they saw a wrongly-assembled piece of furniture. But fortunately the phone number of the IKEA assembly professionals was included. 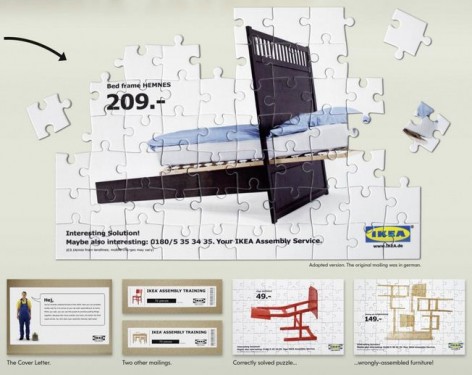 The results
The assembly Training worked out as a part of a integrated direct campaign. A review of bookings showed that 2173 Assembly Service orders were placed directly after the campaign. That’s three times as much as in an average month of the quarter before and represents a growth of 300%