MINI drivers loved their MINI; they treated their car more like a pet, or even a partner.
Convincing these drivers to trade in their beloved best friend was really hard…

The problem was, the new MINI F56 may have looked like the old MINI but it was more like a reinvention
of the MINI from the ground up, representing the most significant advances since the MINI was reborn in 2001.
If MINI drivers were ever going to replace their car, now was the time.
But only if they realised the new model was something special.
The task was to make sure MINI owners took notice; simply sending a new car brochure wouldn’t do.

Idea
The idea was to play off the intense and intimate relationship MINI owners often had with their cars.
They gave them names, they treated them as family.
The insight was to ask, how would your current MINI feel if it found out you were considering driving a new one?
And, more importantly, what would it do?
It would write a letter, obviously. 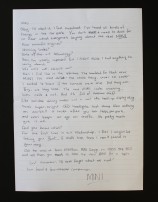 Results
After the mailing, the MINI website saw an increase in site traffic of 124% for the period of activity.
The average time on site increasing by over 389%. The dealer network reported an increase in
interest in the new F56 MINI with an increased number of phone requests for more info and test drives.

Comment
The numbers vary, but it can cost ten times more to acquire a new customer than hanging on to an existing one.
So this mailing is all about loyalty to the brand.
Firstly, if a MINI owner is to become a MINI loyalist, the product has to deliver. The car has to be reliable, fun, all those things.
But after that, it’s about maintaining a relationship. Keeping in touch.
The brand reminding owners that it’s thinking about them with a whole programme of mailings,
every one of which is a personal hello from MINI to make the owner feel special.
This is MINI being true to itself, quirky and playful, but also being pretty darned smart because
it would certainly have led to dozens of new cars sold. 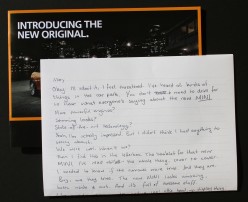 To make the letter feel personal and intimate, it appeared to have been hand-written.
In addition, note the use of a stamp rather than franking, which would have communicated
instantly that this came from an impersonal corporation.