Nobody knows Berlin like Lufthansa does but in Sweden the airline was bottom-of-mind. In a competitive market, where everyone offers the same comfort at the same price, Lufthansa needed to stand out by talking not to the wallet but to the heart. Idea
Swedes love Berlin and the life that the city offers. So the idea was to offer them a life there. It was what the Economist called a simple “bar bet”, a dare, which became an international story. Swedes were asked, do you love Berlin enough to change your name? Lufthansa then offered up one free new life there, with a one-way ticket, an apartment and everything it took to start afresh.
The catch? They had to prove their dedication by legally changing their name to Klaus-Heidi, a gender-bender name fit for the modern Berliner.
At the site, visitors could see a film about what their new life might be like, download an application for a name-change and buy a flight to Berlin at a discount.
To get the campaign off the ground, influencers were mailed a passport showing their new name as Klaus-Heidi and an official application form if they decided to go ahead. 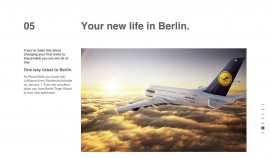 Results
1,100 people downloaded the application form and 42 Swedes changed their names by deed-poll to Klaus-Heidi. The winner was Klaus-Heidi Andersson who flew to Berlin, where he was welcomed by the city mayor.
Lufthansa filled an Airbus 319 with sales that came from the site. The campaign got 240 million media impressions, making the news in over 30 countries. During its peak it accounted for over 25% of all Lufthansa mentions in social media.

Comment
Communications today seems to me to be all about trying to get people to become participants in your idea. Why tell people that Lufthansa flies to Berlin and costs about 1200 SEK (€130) which is boring when you can sell the sizzle of the city instead? No-one is really interested in the journey but they are interested in the destination. This simple insight into how people really think led to a famous campaign, brand awareness scores way up and lots of bums on seats.