Colon cancer kills even more people than breast cancer. In 2008, 610,000 died from the disease as opposed to 460,000 from breast cancer.
People over the age of 50 have a 1/20 chance of getting colon cancer. It takes about 10 years for it to develop but, if detected early, there is a 95% cure rate.
There is a cheap and easy test for the disease but hardly anyone in Belgium knew about it.

Idea
In May 2013, Angelina Jolie underwent a double mastectomy because she carried a faulty gene, which made breast cancer a likelihood.
She put discussion about cancer on every front page and news channel in the world.
Perhaps her husband could do the same for colon cancer.
A letter was sent to Brad Pitt enclosing a colon cancer test kit. It was also sent to his management company, his agent, to his French castle and to various press organisations in order to create buzz. It was also put online at www.dearbradpitt.com. 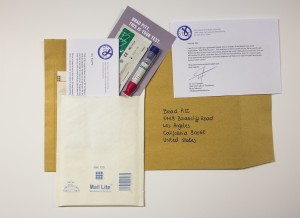 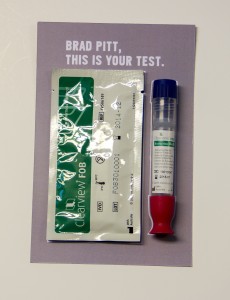 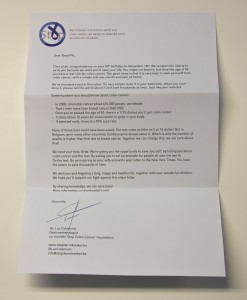 Results
The story spread rapidly through social media and made it to the TV news. However, there was no response from Brad Pitt. So a Thunderclap campaign was created.
(Thunderclap was a way people could share a message in an online sort-of flashmob way with all their followers and friends at a specific time, on a specific day.)
The message reached 1.25m people. There was support from celebrities, politicians, organisations from around the world including a group of Italian football stars.
Traditional media followed the story and a radio station in Belgium tried calling Brad Pitt.
A message came from his management team that Brad was busy until mid-February but they ‘could probably get some answer…’
More blogs and websites took up the story. So far, it has reached around 5.4 million people. Some of whom may have their lives saved by taking a simple test.
And it all started with a letter.

Comment
Isn’t it amazing, how one letter can reach over 5 million people? That’s the power of a creative idea for you. It’s also a demonstration of what you can do with mail if you think of it in the context of social media.
People will share links, ‘like’ posts and follow brands IF they are saying something interesting, something useful or (in this case) something important.
Okay, it’s not great for bpost in that they sold only six stamps but it’s a reminder that mail has as much of a role to play in an integrated campaign as any other medium.