Climate change, dredging and erosion were causing the Great Lakes to disappear before the eyes of the people who lived beside them. In 2013, Lake Huron’s water levels hit a record low.

Stop The Drop was created to provoke government action on the issue. Their first task was to galvanize the people who cared most about Lake Huron. The problem was that the  lake-side community’s remote location and largely unplugged lifestyle made them hard to reach with traditional media.

So a cry for help from the lake itself was created. Five thousand letters were printed using clear ink that soaked all the way through the paper; normally an imperfect technique, it perfectly created the look of water trapped on the page. Then the letters were rolled and packed into glass bottles.
These were then distributed along the shoreline of the lake. 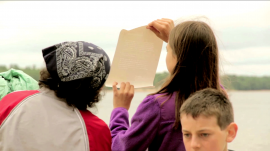 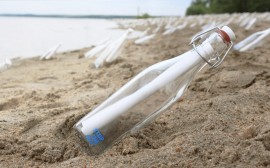 The messages in the bottles generated over 20,000 petition signatures and gave a lake without a voice a way it could be heard.

Direct mail doesn’t necessarily have to be a letter in an envelope delivered to your door. It can be a message in a bottle. That’s what makes this idea so powerful. It is so evocative of all those old stories of shipwreck and castaways, when the only hope of rescue was to write a note and set it afloat on the sea.

It is not just relevant to the problem it is trying to solve but beautifully apt.