P&O Ferries reaches out to people who crave adventure, spontaneity and freedom. People who want unique experiences. And people who want to discover the hidden gems for themselves. Their motto? Just throw everything in the boot and go where your mood (or whim) takes you. Forget planning. Spot a medieval cathedral. Head towards it. Fancy hiking? Biking? How about wild camping? Do it. You’re free. But how do you get this across, with only the budget for a simple letter?

The obvious way to show the freedom that comes with a P&O Ferries adventure is with incredible destination imagery. That is exactly what its competitors do. But P&O Ferries wanted to bring the spirit of adventure to the forefront in a way that would draw its audience in. They wanted something that was as different and unexpected as one of their trips. So, they told a story. The whole thing was written in the second person. It put the customer right at the heart of the adventure. It brought to life the choices you have on a P&O ferry from the moment you step aboard. And it takes you on an adventure. They set the copy free (like our customers) so it could flow anywhere, even to the back of the letter. And they managed to deliver an exciting message in a simple, elegant letter format. The letters and tweets they had from customers combined with the results proved that this really resonated with their target audience. 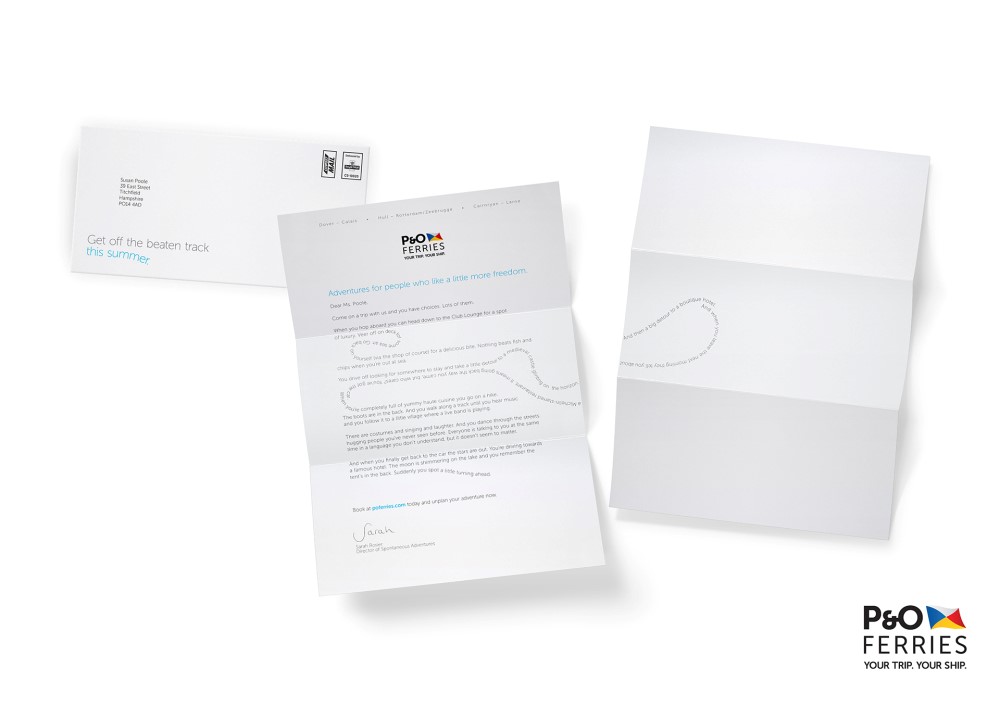 The week the letter dropped, visits to the P&O Ferries website went up by 32.2% (from same week in previous year). The following week they had a 21.7% lift (from same week in previous year). Even better, they had a 17.8% spike in revenue for Dover to Calais and a 10.3% spike for the North Sea (our primary routes). Which resulted in hundreds of thousands of pounds in increased revenue.

It was the French philosopher Blaise Pascal who first wrote, “I’m sorry this letter is so long but I didn’t have time to write a short one.”

This idea looks as if it was put together in five minutes. But achieving simplicity is damn hard work. The headline is a cracker, too. ‘For people who like a little more freedom’. Almost every recipient, even the least adventurous of them, would be hooked by that headline, thinking ‘That’s me, I like more freedom.’