BMW in Switzerland had a history of innovative Christmas cards which put a smile on the faces of their customers and partners. This time, however, the idea had to cover four different ranges (BMW X5, BMW i3, BMW M4 and BMW 2 Series) so it had to be based on a feature all the various cars had in common. 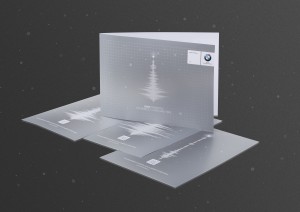 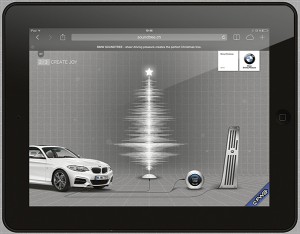 Idea
Since every BMW has performance at its heart, the idea was to dramatise the engine under its bonnet.

The engine sounds of the four cars were recorded. When played through a seismograph, the sound waves of the revving motors resembled a Christmas tree. Upon receiving their Christmas card, BMW owners could go to the website, select a BMW, start the engine and rev it. Then they could capture their own unique soundtree and share it in social media.
They could also order their own greetings cards depicting their soundtree. VIPs were mailed three-dimensional models of their soundtrees to keep.

Our thoughts
There’s a buzzword in marketing at the moment – nonline. I think what it means is, an idea which is neither online nor offline but both, an idea which would not exist without the two being used together. If so, then this is nonline at its best. It started out as a Christmas card, which then directed people online, where it became a virtual experience before it went back to being physical again.  By the time your 3-D sculpture arrived through the post, you would have had a pretty lengthy engagement with the brand. And the Christmas card, which arrived in early December, would have had its life extended out into February or March. Not sure how Christmassy it is, emailing your mates a link to your screaming engine, though I’ll grant you the sculptures do look a bit like fir trees.